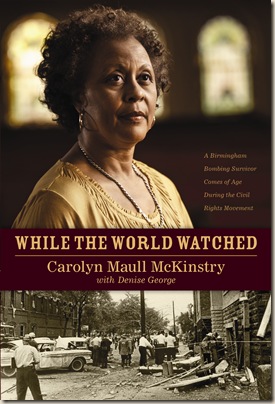 I am a little ashamed to admit that even though I have loved history ever since I can remember, I haven’t read a lot about the Civil Rights movement.

So reading this book was really  important to me. Civil Rights does matter to me. A lot. ButI grew up in a part of the world that often felt far removed from the struggles in other parts of our country over skin and equality. In our home, there was no difference between Asian, Hispanic, Black or European—between anyone. I never heard my parents refer to people by their skin color.

It never occurred to me as a child that it would matter to anyone else in the world, either.

Until I went to an all African American church .Two thirds of the congregation was visibly uncomfortable, and half wouldn’t even look at me. I couldn’t figure out why then. I didn’t know about anything.

As I grew up, I read some about Martin Luther King. I became much more aware of the pain between two cultures in our nation. I read some about the KKK that disturbed me and gave me nightmares. But I had a hard time imagining something I’d never seen before, besides the reverse (and perhaps out of habit formed by prior sad experiences) prejudice I experienced when I attended that church as a child.

But one day I found myself in the true south. I finally understood what racial prejudice could still be like. I was shocked to hear that there were still places that were too dangerous to go if you had the wrong color of skin, hurt by the way that fellow Americans could still treat each other after so many years in a land that is free.

When I had the chance to read and review a copy of While the World Watched, I knew it would be good for me to understand more first hand what actually went on in the heart of one of the most violent places in the Civil Rights times. I figured it would be hard to read, and I was right.

While the World Watched isn’t an easy book to read. Carolyn Maull KcKinstry experienced some first hand some of the terrible things that happened during those years in Birmingham. She was in the Sixteenth Street Baptist Church on the day it was bombed. She lost four of her friends that day, and this book tells her story—of her life before and after, and of how she dealt with the death of her friends, and the way that the world seemed so silent for so long.

And though many times tears filled my eyes and found their way down my face, it was the way that she forgave that touched my heart the most. Even as she faced the man who had placed the bomb that killed her friends, she said “by God’s grace, I forgave…it’s the difficult road, but it is the road to ultimate freedom.”

I still feel like there is a lot more I want to know about the Civil Right’s Movement, and I really don’t know a lot about who Martin Luther King, Jr. was as a person, even though I’ve read and appreciated many of His quotes, and while I personally don’t support the politics of Obama and I believe that Civil rights goes both ways…and some of the other extremes that I’ve seen and experienced on both sides of the picture have made me feel that we all have a long ways to go still. (Such as experiencing severe prejudice as a white girl in an all black community—to the extent that they would hardly sell me a cup of water when I asked.) But I am glad I understand the kinds of things that have happened better now, because it helps me understand the potential cultivated fears behind the prejudice that still exists.

So, regardless of your views on the Civil Right’s Movement—and what should or shouldn’t have been done, Martin Luther King, or your political leanings today, I would say that While the World Watched is a book well worth the reading. If only to understand what it must have been like to be there, and yet to forgive.

thanks to tyndale publishing for this copy of while the world watched for review purposes. the opinions and statements made are mine alone.