I’ve always been a dream-chaser. But one of my biggest dreams has always been being self-employed.

I was five years old when I first decided that I didn’t want to do any of the things my friends talked about doing when they grew up.  I didn’t want to be a doctor like my cousin. (For the record, he is a doctor now and a mighty fine one!) I wanted a blueberry farm. So I decided that was what I was going to have one day. But to get there, I figured I’d need a job that I could do from home. I didn’t know what to call it at the time, but I had just birthed my work at home dream.

More than 25 years later, I still want that farm more than ever. However, I realized along the way that it’s going to take a lot of creativity and work to get there. Small time farming is a good, important work and I believe in it wholeheartedly. I know that farming alone might not pay the bills–and we have to get the money to buy that land to start the farm, too.

Every day, I’ve been scratching and clawing and crawling on my hands and knees towards that Blueberry Farm that I still believe is in our future. By the time I was in my teens, I had mapped out a road to get there, but I just didn’t have the tools to actually do the navigating. And there were missing pieces in the picture that I wasn’t sure how to overcome. I met Scott, we shared common dreams, and I knew even more than ever that I wanted to make a way to work from home– for both of us.

So I just tried anything I could get my hands on. I worked, and cried, and flopped a few things. When I discovered the keys to being a Virtual Assistant four years ago, I knew I’d found one of the missing pieces to what I had started calling our escape route.

The most important thing for being an entrepreneur is that we can never give up.

Almost everyone I knew thought I was crazy when I quit a job that barely paid the bills and literally was killing something inside of me every day. Coming from months of unemployment, and living on one tiny income did sound like a crazy idea. And hearing all the negative comments and the suggestions that I should just get over my “silly idea” of making a business online and get back to the real world was incredibly challenging. I second guessed myself, our dreams, and more than once I nearly caved. But I could never give up the dream, and I never stopped trying to take baby steps.

Not giving up is the most important part of making working from home a reality. Often, I felt clueless. I would look at the big picture and see so many things that I had no idea how to work out. I knew that there was no easy route to our ultimate dream of owning a berry farm and being self-sustaining, but I wished that the route was a little easier to decipher. 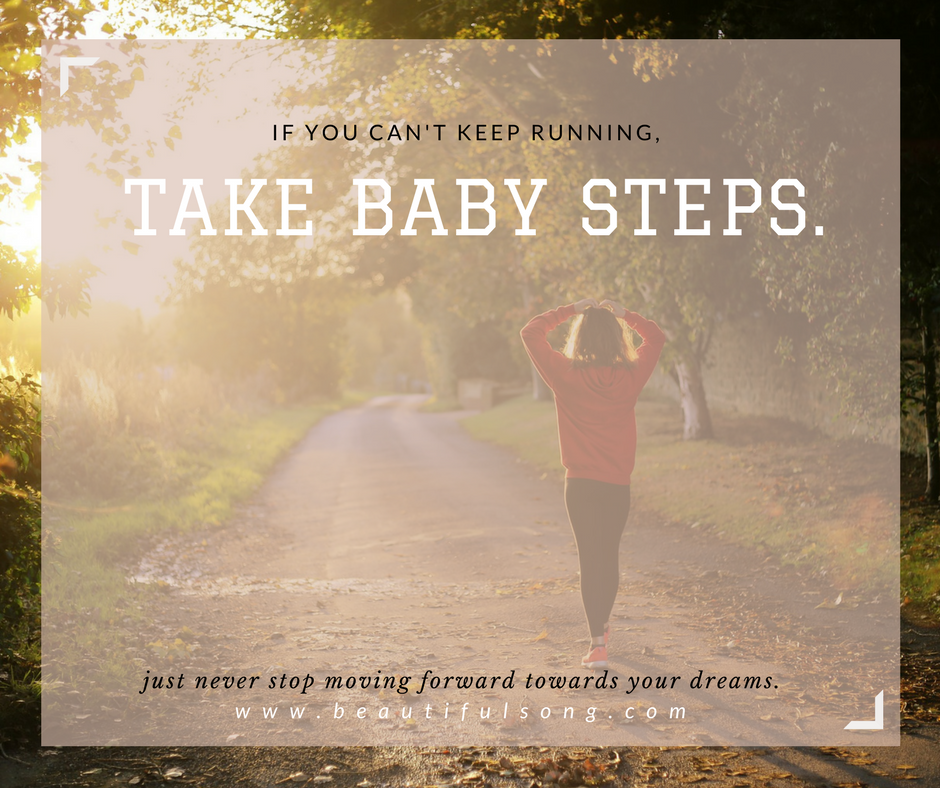 It’s not easy building a business from scratch. In fact, it’s probably one of the most challenging things I’ve done. It continues to challenge me daily.

Life has thrown us some pretty big curve balls. I’ve been knocked flat a few times, and I’ve hit a few dead ends. I’ve flopped ideas. And sometimes I’ve had to crawl instead of walk towards my goals. To be honest, I’m still scared when I think about how much farther I need to go to get to the big dream.

But I’m determined that when I get knocked down, I’ll struggle to my feet. I’ll take baby steps until I can run again. The important thing is to keep moving forward, instead of getting stalled.

Because now working from home isn’t a vague dream.

I have a real, running business. One that I built myself, with the tools that so many other generous entrepreneurs shared with me.  I’m working from home from a desk in the back of my house bringing in real money that is going towards our freedom someday.

And it’s hard work. Working from home is every bit as hard as I expected, and probably a lot more complicated than I could have anticipated. Sometimes, I’m tired. I want to sleep in. I just want to clean my house and not turn on my computer for a week. Sometimes I feel guilty because even though I’m a full-time mama, I spend a lot of hours in front of my computer trying to finish to-do lists and somehow get done in time to make supper. I feel guilty because I have to pick and choose and I can’t do all the fun things other mamas do. I feel guilty because even though I will always pause my work to read a book or to color a picture, sometimes I have to put my head down and plow through my work and it just takes a long time.

But then I look at all the myriad of ways that working from home has made life better for my family, and all the ways it allows me to be present and involved in my child’s life and I can’t help but be overwhelmed with gratitude and happiness. This is exactly what I wanted, and it is so worth the long hours and the complicated juggling.

It doesn’t stop here, though.

While I’m closer than I was when I was gone every day working 12 hour days away from home, we’re a long way away from a berry farm and from the kind of freedom over our schedules and lives that we’ve both been chasing in different ways since we were kids.

The thing with being an entrepreneur is that you can’t stop learning and expanding. I am still growing my Virtual Assitant business every day. I’m still looking for better ways to work smarter, to be more efficient, and to maximize my income. I’m looking for passive income to fill in the gaps.

The truth is that there are no quick roads to reach our goals. (Granted, I’ve taken a lot of scenic routes as I’ve tried to learn the ropes!) It’s a matter of time, patience, perseverance and creativity.

I’ve had some discouraging months. Years when I didn’t make as much money as I needed to, and days and months when I just wasn’t sure how I’d ever pull off working enough hours to close the gap so that Scott could quit his job too.

But I’ve also found some answers. I’ve found new things to try, and things that make me excited and hopeful.

I feel that against the odds, we’re getting somewhere.

Even with setbacks, like mandatory health insurance at rates that sometimes make me ill, or changes in programs that help support us and the websites I manage, the future is bright.

I try to take it all in.  To learn what I can. To keep trying and keep evolving.  And I think there’s going to be a time in not-so-distant future when I’m going to be able to wake up and say “We did it! We finally did it.” I  believe that one of these days, Scott and I will hang “Brankshire Estates” over our very own drive that leads to the blueberry farm I’ve pictured all these years.

It’s going to mean a lot more work to come. Lots of long hours. Crawling out of bed when I’d rather sleep just one more hour after a night of being woken frequently. In short, there’s a lot of blood, sweat, and tears coming up. But is it going to be worth it? Absolutely!

Do you feel like you’re on fumes chasing your dream? I can totally relate. This is the hard stuff in life, and I know firsthand how discouraging it can be to not see the forward progress we’d like. But here’s my strategy for success.

Focus more on what’s ahead than the things that didn’t work that are behind you. Learn from them, but don’t let them become a stumbling block that keeps you from making any progress at all.
Don’t give up. Take deep breaths. Refocus, reprioritize and try again if you need to. Failure is a part of the road to success. If you can’t run forward, just keep making baby steps. Crawl if you need to. But don’t ever give up on going forward.