Today I need to say something. I am a csection mama, and I’m not ashamed of it.

It’s not been exactly easy. Sometimes I still run my hand against the scar and ache inside a little. At the same time, I am grateful. That cut means today, I have a living baby girl.

I had always known exactly what I wanted my labor to be like. Natural labor. Minimal interference. Preferably no pain medication. Quiet, and only the absolutely necessary number of attendance. Just Scott and I there to hold ourlittle one for the first time. I wanted it to be beautiful and intimate. Empowering.

But that’s not what happened.

Pregnancy wasn’t hard for me.

True, my feet became unrecognizable, swollen blimps for which I could find no shoe or sandal. I walked barefooted for five miles almost every day, and I felt great!

True, I had two pregnancy rashes from head to toe that sometimes itched so badly I thought I might go crazy. But I didn’t care. It wouldn’t last forever, and at the end…we got a baby out of it!

Over all, being pregnant was easy. All 42 weeks and 2 days of pregnancy.

I knew my date of ovulation. I knew that babies don’t always arrive by magic on the 40th week.  I was okay with waiting on labor. It would happen.

But it never did.

On the last day that my midwife was legally allowed to attend, I checked in to a room at the woman’s center and the first one of all of my dreams for labor and delivery slipped away.

Trying one thing after another to kickstart my body into natural labor. Induction. No progress. Meconium so thick in the fluid that it was more like slime than liquid. Hour after hour of contractions with no breaks between the peaks. A fever that spiked out of no where and wouldn’t go down. They feared infections. And my baby suddenly going into distress. More than 36 hours after checking in, I found myself being wheeled away for an emergency csection.

Absolutely nothing that I’d dreamed of for my labor and birth experience happened. Everything I feared, did.

I was just thankful at that point to be okay, and that she was okay.

And then it started. The guilt and shaming by people who I needed to be supportive and happy with me.

I believe that they probably meant well. Perhaps they thought they were encouraging.

But could I have changed the outcome of my experience? Probably not. Did I try everything? I did all that I knew to do. And in the end, Scott and I made the best decision we could for the health of our child and for my health. It was the scariest thing I’ve ever done.

But at the end? We got a baby out of it. A gorgeous, chunky redheaded baby girl. She was perfect. I was okay. I would heal.

But that’s how it goes with cesarean mamas. We’ve been through something hard. Traumatic.

Csections are not a lucky break. Most of us fought our way through labor, hoping, praying, trying everything we could to give our baby the best possible start.

Two years later, I’m still healing from my csection, physically and emotionally. Recovering from a surgery like that and taking care of a colicky newborn is not for the weak.

We all – natural mamas, epidural mamas, csection mamas, want the same thing: a healthy baby at the end. We are all good mamas. We all do what it takes to “get the job done”.

But for us who delivered our little ones into the world on a table in an operating room instead of at home or in labor and delivery, we often get shame.

We’re left to believe that we’re less of a woman because our birth wasn’t “how it was suppose to be”. We get the message from around us that others believe that we weren’t brave or strong enough to do the real thing, and it’s loud and clear.

Of all the things in the world where we should give love and support, why do we judge and shame instead? Why do we think we can decide which mama is brave and which one isn’t?

Most of us didn’t walk into the hospital and sign up for a csection. And even if we had, does it really matter?

Natural birth without any pain medicine. Birth with epidurals. Birth by cesarean.  Birth by adoption. Whatever process you took to becoming a mama. 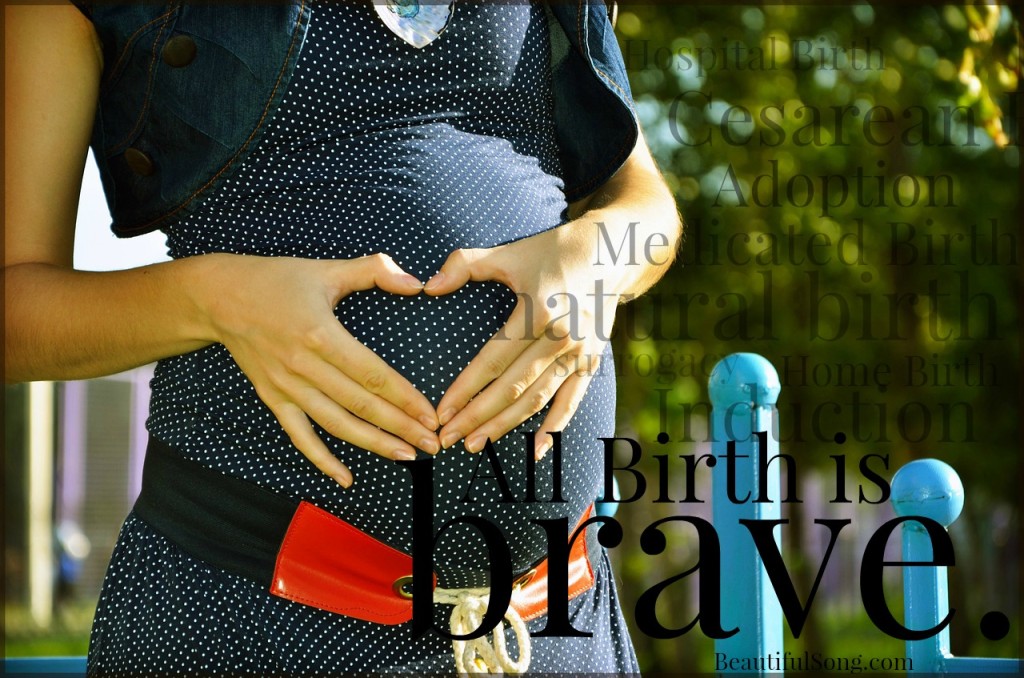 Because in the words of a sweet friend, all birth is brave.

It’s Cesarean Awareness Month. Be kind. And remember, no matter how you became a mama, you are brave.